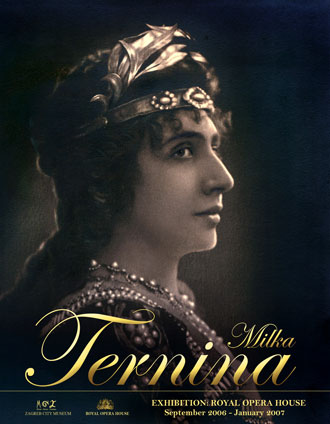 Croatian soprano, Milka Ternina, was an international star at the turn of the twentieth century. This exhibition, drawn from the Milka Ternina Bequest of the Zagreb City Museum, celebrates Milka Ternina's life, career and long association with London – 100 years after her last performance at the Royal Opera House.

Milka Ternina was born on 19 December 1863 in Doljnji Sip, near Vezišće, a small village 50 kilometres from Zagreb, then the capital of Croatia which was part of the Austro-Hungarian empire. Following the death of her father when she was six, Ternina's family decided she would receive a better education and more opportunities if she went to live with her uncle and aunt in Zagreb. Her uncle Janko Jurković was a writer and government counsellor, who was at the heart of cultural life in the historic Old Town of Zagreb. Following her education in Zagreb, Ternina studied voice at the Vienna Conservatory with Professor Joseph Gänsbacher and won the coveted medal for the best student.

Ternina made her stage debut in Zagreb on 11 April 1882, singing Amelia in Un ballo in maschera (Verdi), the first steps in a career which would see her performing in Leipzig, Graz, Bremen, Munich, London, Bayreuth, New York and Boston. Sadly this glittering career was cut short after little more than 20 years, following complications from an inflamed facial nerve. Ternina returned to Zagreb in 1913, where she lived until her death on 18 May 1941. 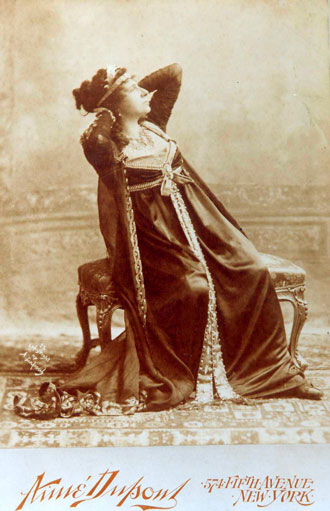 Following her retirement, four of Ternina's costumes were exhibited in the Zagreb City Museum and these costumes along with other memorabilia were given by Ternina to the Museum in perpetuity. For Ternina her costumes were “wonderful memories of artistic work and glory” and she stipulated that “they must not leave Zagreb”. Seen for the first time outside of Zagreb since her retirement, it is fitting that they should return, on loan, to the Royal Opera House, a theatre for which she retained great affection.

One of the highlights in Ternina's career was singing the title role in Giacomo Puccini's Tosca at its premiere at the Royal Opera House on 12 July 1900. Puccini was in the audience for the premiere and joined her on stage for a curtain call. On display is an affectionately inscribed photograph of Puccini, who later declared that “No other Tosca has ever approached Ternina's”. Ternina followed her triumph in London with the premiere of Tosca at the Metropolitan Opera House, New York, in 1901. At this time, leading opera singers travelled with a trunk of costumes. Ternina's costumes were an integral part of her approach to each role, and she took a keen interest in their design and creation. In 1900, she commissioned British artist and costume designer Percy Anderson to design costumes for a range of roles. His attention to detail and harmony of colours had a dramatic effect on stage. 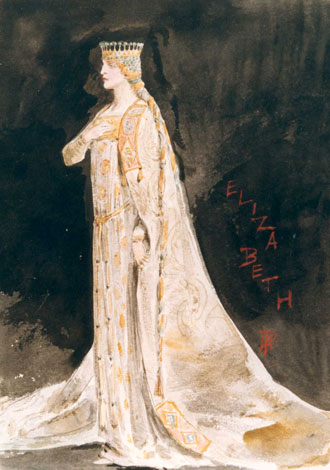 Ternina kept 32 of Anderson's exquisite watercolour sketches, which are displayed with the four surviving costumes from Tosca, Tristan and Isolde and Tannhäuser, some of the finest examples of theatrical design and craftsmanship from the early 20th century. Made in London, the costumes were lovingly restored by Zagreb City Museum, who found labels indicating that 'Miss Fisher, Theatrical Costumière, 22 Bedford Street, Covent Garden' made the Tosca Act II costume and 'M Nettleship, 58 Wigmore Street, London' made the costume for Elizabeth in Tannhäuser.

The two magnificent Tosca costumes are in the French Empire style, reflecting the period in which the opera is set. The costumes from the Wagner operas Tristan and Isolde and Tannhäuser are in the medieval style favoured by many designers of Wagner operas. The Tannhäuser costume was last seen at the Royal Opera House on 28 August 1906, when Ternina sang Elizabeth, her favourite role, in what would be her final performance here.

These costumes can be seen in the Carriage Entranceway and in the Floral Hall. The wall cases leading off the Main Entrance Foyer are devoted to Ternina's appearances at the Royal Opera House and include a selection of Percy Anderson costume designs, photographs, programmes and press cuttings. In the Cloakroom Corridor there are photographs and programmes recalling her life and career, alongside showcases displaying photographs, scores and commemorative items, including some of the silver laurel wreaths presented to Ternina during her distinguished career.

Ternina lived boldly for her art, declaring at the end of her life that “Artistic life is difficult and painful, but despite that, if I could live again and could choose, I would choose no other vocation”.


Pictures from the exhibition 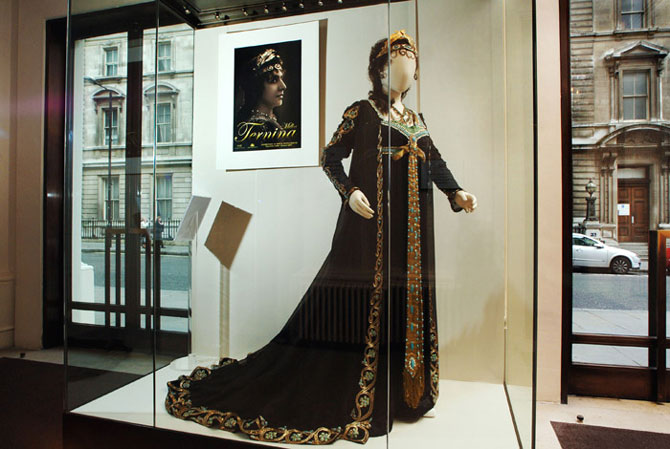 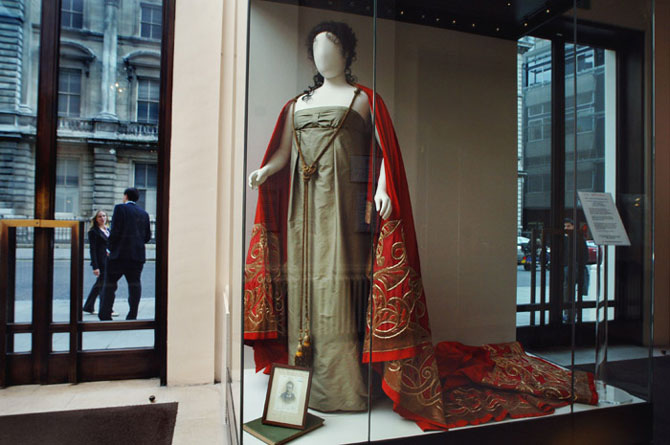 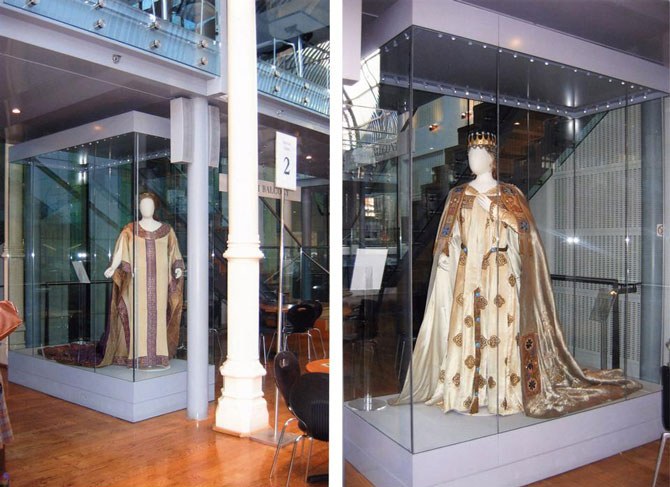 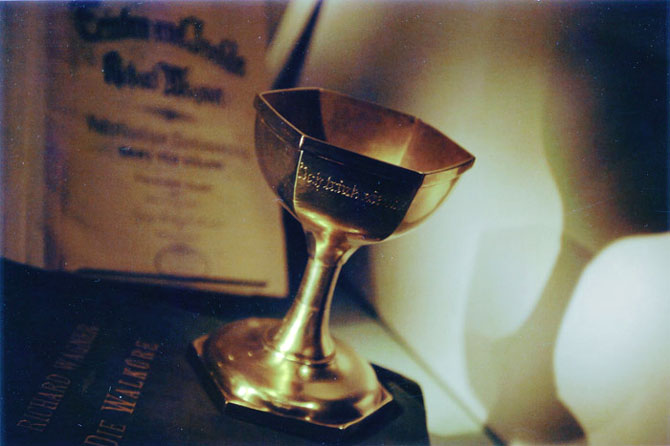 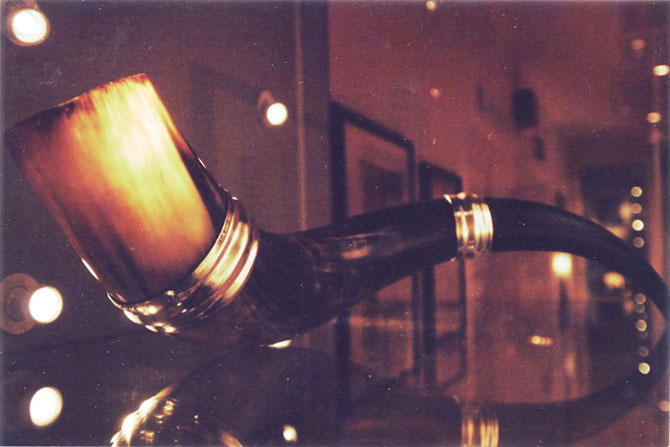